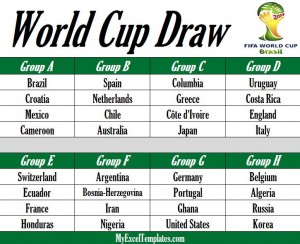 With the 2014 World Cup approaching, many offices are looking to set up contests based on the draw. People will want to watch some of the match ups unfold in live action. This 2014 World Cup draw sheet will help people get the sheet to follow the action. Many co-workers will want to make their predictions and compare them as they go. This document will help make sure that they can simply check off the matches as they go. Some people may be impressed by how simple it is to utilize this document. It will go a long way towards helping make these office pool events go much more smoothly.

Basics Of The 2014 World Cup Sheet

This sheet has been updated to feature some of the best teams that are in the world. They have already completed their preliminary matches, so these draws have been set. Each of the teams will play each other during the group matches, at which point they will move on to take on other opponents. Many people enjoy watching this stage of the tournament, because it does have an element of uncertainty to it. The 2014 World Cup draw sheet will help many people make sense of how the action is unfolding in front of them. The document itself can be downloaded very easily, since it is available online. It can also be customized fairly easily as well, since the document can be edited on most computers out there.

How to Customize the 2014 World Cup Sheet

The document can be edited by almost anyone, so many fans will want to customize the document to suit their needs. They should make sure that they follow the action and get the document updated as teams advance. Some people may want to run off several copies to pass out to their co-workers. It will also be important for people to review the document to see if they have personalized them as well.

This sheet may help draw in new fans, which will be impressed by the action on display at the 2014 World Cup. This will help many people, who want to learn about how the game is played and some of the tournament rules to follow. But it will all start when employees create and customize their own 2014 World Cup sheet.